Maria was born on the 9th of September 1839, in Leiden, Netherlands.

She had five sons and two daughters with Johannes and divorced him on the 29th of January 1886. Maria took good care of the children and sick people in the poor neighborhood where she lived, and they gave her the nickname Goeie Mie, which translates to Good Mee. 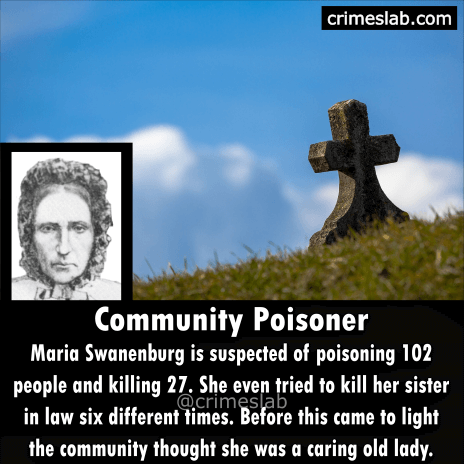 It turns out she was not helping the community but killing them by putting arsenic in their food and drinks. According to sources the estimated time of her murder spree was in 1880, where she poisoned 102 people, 27 of which died. During the police investigation, there were a total of 90 deaths that were suspicious. The problem is there is no conclusive evidence to tie Maria to the deaths.

Her first victims were her mother and father. She also killed several other family members. But why would she commit such atrocious acts? The answer was, the insurance pay-out. She even tried to kill her sister in law six different times.

In December 1883, she tried to kill the Frankhuizen family but was caught. Three different doctors examined her for mental instability, and they all found her sane.

Her trail started on the 23rd of April 1885 and lasted only two days. Maria told the court she did not intend to kill the victims and confessed to two of the last three murders. With a guilty verdict to all three murders, she was sentenced to life imprisonment. Even her lawyer thought she was a monster and that she suffers from moral insanity and should be punished to the maximum extent of the law.

She died on the 11th of April 1915, at the age of 75 in Gorinchem Correctional Facility in Netherland.